The Latest in Authoring Software

Hey, who out there wants some powerful and free writing software in their life?

Then strap in my playwright friends because I have done the research and tested the wares and built the list and shall heretofore and byhence be presenting specifically for you the latest in authoring software. With notes. Because I’m a hard-core, full-service playwright blogger like that.

During the early months of 2014 the membership director at The Playwrights’ Center asked if I wouldn’t mind leading an online seminar on the subject of authoring software. I believe she asked me for several reasons, the primary reason being she was sick of me nagging her about getting to lead an online seminar about authoring software. My nom de guerre is Squeaky Wheel. Buy my albums.

I did what any honorable seminar leader would do, which is amass various resource materials to cull a sense of which authoring software applications currently dominate the virtual scene. I figured it would be easy to identify the four or five preeminent apps. My goal was to review these select apps and communicate their benefits with respect to playwrights and playwrighting. The seminar teaser:

“In this short and informative online seminar, we will quill the various entrants (old and new) to the writer’s world, highlighting their features, and bemoaning their pitfalls, all to make you aware of the many ways to get your ideas from brain to permanency. Whether for text creation, mid-stage editing or final formatting this seminar will provide you with knowledge of the full collection of writing tools available.”

No problem, or so I thought.

Because I then ran into the overwhelming sea of options at the iTunes store.

People were revving with energy at the start of the seminar. There was chatter before I even opened my mouth. One playwright was antsy because his version of Word was running out…not kidding…tomorrow. Help me, Sam! My license of MS Word expires tomorrow and I need to be saved! Meanwhile, others were curious about Scrivener. Some wondered about the rumored demise of Final Draft.

I launched the seminar by introducing a guiding rule, which is, that writing is a very personal practice.

This is our starting point. Why? Because there is no ‘right’ solution. There is only a software solution that works for you. And you have to know how you do your best writing. For example, I have come to realize that I do my best writing with the following applications:

These are where my best ideas get forged. My best writing does not come staring at a screen. It does not emerge from software.

Again, acknowledging that writing is a personal practice is critical because the art and practice of transferring ideas to tangible medium via automated word processing have changed over the years. I remember during my college days when the big new thing was that monstrous electronic typewriter. Weren’t those hilarious? Watching my roommates spend more time and effort than it look to land a human on the moon squinting at black dot-matrix characters scroll like a NASA countdown across that tiny green box. Thank God for drugs.

I mean SOFTWARE. Not drugs. Never do illegal drugs. Except, wasn’t the reveal codes function in WordPerfect like a drug? Addicted was messing with the greatest in new software at the computer lab. I got my first job out of college because I knew PowerPoint. Not even joking. That was the centerpiece of the interview. So tell me Sam, do you know PowerPoint? Oh yes, I give great PowerPoint. You’re hired. Four years of studying macroeconomic principles and advanced music theory and the guy wants to know about my P-Point skills.

Interestingly enough, it was several years later when NASA blamed PowerPoint for the Columbia shuttle disaster and senior military officials banned PowerPoint use during briefings.

RIGHT. You’re looking for that vetted list of authoring software.

So I ran into the bewitching and overpowering force of the iTunes store.

I learned that 2013 was when it became the word processor market’s turn to get saturated with new apps. The iPad was commercially released in 2010. Not long after that the phrase ‘there’s an app for that’ became common speak. Trust me when I relay to you that now, when it comes to authoring software, there’s about 4,006 apps for that. It’s mental knockabout keeping track of them all.

Because of the profundity of options I decided to construct the below list based on hardware. My assessment of today’s playwrighting tools is that hardware should be the first step when committing to software. You might be dazzled by the features of Editorial or Quip, but do you really want to be writing thousands of words by tablet? Or your phone?

The issue I have is not with the app or the software but instead with the merger of software to hardware. Why? Because certain entry formats fail to support my input rate requirement. I can type about 90WPM on a QWERTY keyboard from a desktop/laptop command center. I cannot get anything remotely close to that encoding rate from a phone or tablet. Meanwhile, tablet and phone hardware cannot keep up with my tactile editing and formatting input rates. Since encoding, editing and formatting are fundamental functions of the scripting process, and since software is versioned and contoured to fit specific hardware platforms, a machine that can’t keep up with me is a machine not worth using.

And so I present the latest and greatest in today’s authoring software, along with my seminar speaking notes.

What wasn’t included with my notes but became a big talking point was how exporting to .pdf is critical. You simply cannot use an authoring software that doesn’t offer the ability to export to .pdf. The .pdf file format is just absolutely standard for trafficking scripts to your artistic director, cast, etc. To not have this feature is silly.

Second, the above almost all have one thing in common: they require you to use Markdown for formatting. You could just write in plain text, but if you want italics or bold text, or want to add a list or a link, you’ll have to use Markdown. Really not worth elaborating here but I’ve taken care of the issue by listing the apps which allow for common formatting.

Now, I didn’t then and I don’t want to now issue a declaration crowning ‘the best software.’ Since writing is such a personal practice I feel I can only effuse my list, which by its taxonomy proffers a framework for evaluating which software is best for your personal writing situation. However, I did bullet each hardware subcategory by order of importance, based on my own alchemy judging features offered, price sensitivity and durability. You don’t want to become enamored with and dependent upon a particular software only to have it evaporate from the market next year. Anyway, let this list hopefully guide you on your own journey to discovering an authoring tool that can help support and bolster your writing.

The people who joined the seminar spanned the globe. Not surprisingly, everyone shared the same experiences and observations. It’s like we’re these individual artisans, each working in isolation, each reaching out for audiences while reaching out to each other.

You wonder sometimes if these fancy writing tools tend to push us farther away from both. 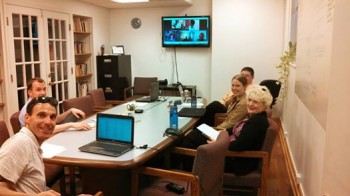 One thought on “The Latest in Authoring Software”

This site uses Akismet to reduce spam. Learn how your comment data is processed.